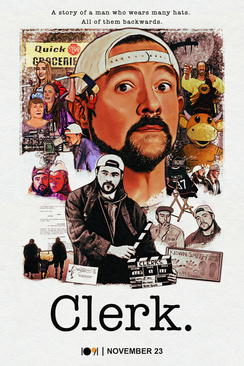 I have certainly lived a charmed life. I am grateful that my job has allowed me to exist on the periphery of the Hollywood that I grew up watching, first on the big screen and then in the comfort of our own home.

Kevin Smith is a couple of years older than I am, but I would certainly consider us to both be in the same generation. We were among the first kids to grow up with video cameras in close enough reach that the glare from Hollywood suddenly seemed a lot more attainable.

As I was starting high school, Smith was enrolling at the Vancouver Film School with visions of black and white denouement dancing in his head. During my freshman year in college, I was working projector booth during an on-campus screening of Clerks and in much the same way Slacker inspired Smith, Clerks was my epiphany.

At that moment, I knew that I wanted to work in the film industry. While some might argue that home entertainment distribution might only be tangentially connected to Hollywood, it has provided a viable career for me over 23 years (and counting).

I've been fortunate to meet many celebrities in both entertainment and music over the years and hands down the nicest and most genuine person that I have ever met was Kevin Smith. So, you can probably guess how this review is going to go, but that's alright because if you're not emotionally involved in Clerk. by the end then I'm pretty sure that you don't have a heart.

As someone who has followed Kevin Smith from the start, I didn't think there would be anything in Clerk. that was new to me, but I was pleasantly surprised. The film opens with a home movie of a young Smith leaving a video confessional to his parents as he sets off for Vancouver and his destiny.

This moment of insecurity and introspection is both enlightening and a bit of foreshadowing to the openness that would become his trademark over the years. I had never seen this footage before and I don't recall Smith even hinting at its existence, but it provides the perfect bookend to the film about the unlikely success of a man who deserves it all and then some.

Malcolm Ingram does a superb job of illuminating the highs and lows of Kevin's life, but two hours just isn't enough time to capture everything. The documentary touches upon his generosity, but one thing left on the cutting-room floor is how he reinvested his success from Clerks and Mallrats to finance low-budget films from his friends.

I made the pilgrimage to "mecca" aka Red Bank for Vulgathon II in 2000 and it's not only where I met Kevin Smith for the first time, but also saw the fruits of his investment labor. Below you will see the introduction to the event where Smith gets up and introduces a few cats that not only made the films seen that day but others that you have undoubtedly seen.

Not only is Clerk. director Malcolm Ingram there (his Drawing Flies is wonderfully nutty), but you'll also notice a young Brian Lynch on stage. All he has done in the intervening years is to become a folk hero to my kids thanks to the animated blockbusters that he has written including Minions and The Secret Life of Pets.

And yet, on that day, I saw his Big Helium Dog and I still maintain that it might be his best work. Well, his best non-animated effort at least.

That's a long way of saying that Clerk. is an emotional love letter to the man who not only blazed (quite literally since 2008) his own trail but brought his friends along for the ride. Malcolm Ingram is one of those friends and he's able to return the favor by presenting Kevin's life with the emotional weight equivalent to all of the pounds that Smith has dropped following his heart attack.

Whether you've been a Kevin Smith fan for the whole ride or checked out around Chasing Amy, there is something for everyone in Clerk.. It's readily apparent that Ingram loves Smith and that affection oozes from every frame of this film.

Clerk. is now available digitally where you consume your digital movies, but it will be available on DVD on February 8, 2022. It was originally supposed to be day and date on DVD today, but manufacturing issues caused a delay on the physical offering.

No matter how you consume it, you won't be disappointed in Clerk. In fact, you'll probably be wiping away the tears. I know that I was.