Review: 'L.A. Story' arrives on Blu-ray with a terrific flourish 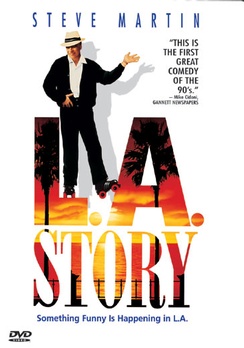 If there's one actor who epitomized a father figure during my formative years, it was Steve Martin. From the Father of the Bride films to Planes, Trains and Automobiles, Steve Martin was the go-to Dad of the early '90s.

At the same time though, he was also developing a career as a loveable everyman who has trouble finding love ala Billy Crystal in every movie he's been in. While my interests tended to be aligned with the more family-friendly fare from Martin, 1991 was a big year for the actor.

Not only did the first Father of the Bride come out that year, but he also showed his more dramatic chops in Grand Canyon and L.A. Story which were also both released in 1991. Believe it or not, this marks the 30th Anniversary of the release of all three of those films and Lionsgate has outdone itself with its special Blu-ray release of L.A. Story.

L.A. STORY is legendary comedian-actor-author Steve Martinâs love letter to the City of Angels. Being in a magical city with predictably pleasant weather can make the life of a meteorologist seem monotonous. When TV weatherman Harris Telemacher (Martin) begins receiving secret messages from an electronic freeway sign, he leaves his longtime girlfriend (Marilu Henner) and embarks on a frivolous romance with a vapid, young model (Sarah Jessica Parker), which ultimately leads him to true love with the woman of his dreams (Victoria Tennant). Beloved by generations of movie fans, L.A. STORY reminds us that anything is possible, and real love can be found â even in the city of make-believe.

While I'm sure that I had seen L.A. Story sometime around its original release, it didn't really make too much of an impression on me. While certainly funny (what film with Steve Martin isn't?), I just didn't appreciate the style and substance of the film at the time.

Flash-forward 30 years and I'm in a much different place in life. As a family man, my tastes have certainly evolved where I can appreciate movies that I simply dismissed when I was younger. I have to say that upon re-watching this Blu-ray release, I was struck by how much the film continues to resonate with modern society.

You can tell that Martin, who also wrote the film, loves L.A. and while that sentiment still rings true, it's the little things and nuances that he pokes fun at that continue to show his true appreciation of the city of angels.

The cast is top-notch and thanks to them, the film is able to transcend simply being another inside L.A. movie with no connection to the outside world. Marilu Henner and Victoria Tennant shine as romantic foils to Martin's Harris, but the real scene-stealer here is the vapid SanDeE played by Sarah Jessica Parker in one of her first big-screen films.

I never really understood her attraction to other people, but after watching L.A. Story, I'm beginning to get it. I was more introduced to her through her Sex and the City persona and that was a bit off-putting to me, but here she's completely free and languishes in the safe space created by Martin. It's a look that I hadn't really seen from her and she knocks it out of the park.

Another actor that I discovered late in life is Richard E. Grant and I find his work recently so fascinating. It was so interesting to see him here in something completely different from what I was expecting. I think I'll have to make catching up on his filmography a top priority for me going forward.

With the film's debut on Blu-ray, Lionsgate has loaded the release with a bunch of special features. I know that a couple were available on the previously released DVD, but as a whole, the included bonuses really make a wonderful value for the Blu-ray investment.

L.A. Story is now available on Blu-ray and it's the perfect Christmas gift for either the Steve Martin fan on your list or anyone who dreams about visiting L.A.