Review: Chemistry is on point in 'Best Sellers' 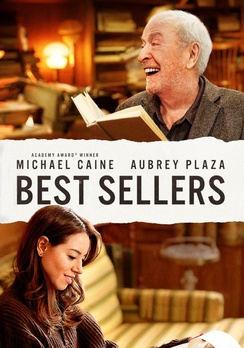 There was a rumor last month that veteran actor Michael Caine was retiring. After a near heart attack by Christopher Nolan, the actor put the kibosh on the report and he's not quite done with the silver screen yet.

While we, as film buffs, are certainly relieved to hear the news, the real winners will be the people who may still discover Caine in one of these late films. Michael Caine has two Oscars and nearly 200 credits over the last 70 years, but there are still people out there who first discovered him in Nolan's Batman trilogy.

Likewise, there will be someone out there who will discover him in this week's Best Sellers. For that person, they are in for a treat because it's abundantly clear that the thespian is still in top form and he instantly elevates any project that he's in.

In a last-ditch effort to save the boutique publishing house her father has left her, an ambitious young editor (Plaza) goes on a book tour with a bitter, booze-addled author (Caine) who put the publishing house on the map decades ago.

Fair warning that Michael Caine's character in Best Sellers isn't a benevolant grandpa type (not that he's ever really played this type of roll), but rather a great crotchety curmudgeonly guy. Basically, he's a hermit with little to no social skills, but somehow his antisocial behavior actually makes him a hit to the younger generation.

Aubrey Plaza is along for the ride, but she's really the driving force behind the film in perhaps her best work to date. Plaza has moved beyond the dumb comedy phase of her career and her most recent entries on her resumÃ© are quite impressive.

I wouldn't immediately think of her as an entitled trust-fund baby, but she really pulls it off quite well. I was actually surprised by the depth of the characters in the film as Best Sellers could have simply recycled the highly successful Odd Couple road trip tropes that have marked countless movies over the years.

And to be fair, I would have paid good money to see Plaza channel her Dirty Grandpa character and go shot for shot with Michael Caine, but Best Sellers went a different route. And we are so better off because of it.

No, Best Sellers is more a journey of exploration of the human character and the connection between two seemingly incompatible people from two different eras. This connection between Plaza and Caine is both sweet and endearing and even hints toward potential hope for humanity as a whole.

Of course, this hope would be in stark contrast to the subject matter of the book at the center of the film. In "The Future is X Rated," the fate of humanity is rather bleak as pointed out by Cary Elwes in a fun cameo as a book critic. While Elwes only graces the screen for a few scant moments, it's definitely a highlight of the movie.

The depth of the film's emotional center was surprisingly deep and the resolution is something that you won't see coming. It's a nice departure from the superficial fluff that has become too commonplace in our COVID reality. It seems that filmmakers (and studios) are more concerned about getting films to the market than on the actual quality of the movies themselves.

This isn't the case with Best Sellers and we really should support these types of films more. I fully expect that this movie will survive the test of time and develop a cult-like chorus of fans who will gleefully yell "Bullshite" to everyone and anyone in earshot.

I will gladly count myself among their ranks. You should too.