Review: 'The Flash' returns to family values in Season 7 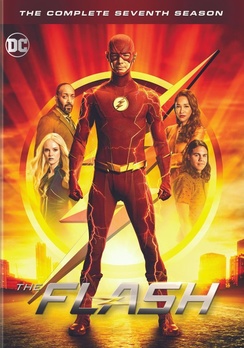 Warner Bros. Home Entertainment provided me with a free copy of the Blu-ray I reviewed in this news story. The opinions I share are my own.

While Arrow was the progenitor of CW's highly successful "Arrowverse" slate of TV shows, there is little debate that The Flash is the show with the most mainstream appeal. Perhaps, it has something to do with the whole being a full-fledged member of the Justice League or having his own set of underoos, but there's no denying the drawing power of The Flash.

It also doesn't hurt that they hit a home run when they cast the show either. Grant Gustin has become a household name thanks to the success of the series and surrounding him with established acting stars such as Danielle Panabaker and Tom Cavanagh is just further proof that a strong cast can lead to TV glory.

The Flash hasn't shied away from exploring the more intriguing limits of Barry Allen's powers such as time travel or the more outlandish villains. I mean they continue to bring King Shark to the small screen and it's not completely ridiculous. No, the strength of The Flash has always been its willingness to embrace its comic book overtures while staying true to the family nature of the character.

While I enjoyed Season Seven, it seems that the show is displaying the first cracks with its rabid fan base. I find that The Flash is at its best when it delves into the familial issues and interpersonal relationships of its cast. It also helps to distract from the sometimes rush special effects that really seems to have taken a hit in Season 7. Of course, that might be due to COVID and the restrictions that it placed on the cast and crew this season.

After last seasonâs cliffhanger which saw the Mirror Master victorious and still-at-large in Central City, Barry Allen/The Flash must regroup in order to stop her and find his missing wife. With help from the rest of Team Flash, Barry will ultimately defeat Mirror Master. But in doing so, heâll unleash an even more devastating threat: one that threatens to tear his team â and his marriage â apart.

This was an interesting season because they are still feeling the fallout of COVID. The first three episodes of Season 7 tied up the storyline from Season 6 that showrunners ran out of time on. I have the utmost respect for the showrunners, but it's a tough tightrope now in trying to find a balance between the story and the unpredictable schedule.

In the remaining 15 episodes of Season 7, the plot follows two main story arcs without the interference of a major cross-over event that led to a choppy Season 6 departure. Interestingly though, one of the major highlights of Season 7 was Efrat Dor, who plays Eva.

Unfortunately though, Eva only appears in the season's first three episodes to finish that story arc from Season 6. I wish they could find a way to incorporate her into future arcs because her acting is a plus to the series.

The rest of Season 7 and the two remaining story arcs focus heavily on Barry Allen's limitations as The Flash. I always find these moments where the hero is presented with his human limitations and weaknesses to be particularly moving in the Arrowverse.

This is where the Berlanti shows earn their mettle and it's no exception here. Many fans point out that this is one area where The Flash falters but I couldn't disagree more. In fact, I think it's a strong argument for Grant Gustin's acting abilities and the strength of his team around him.

Speaking of his team, this season featured the last episodes from Tom Cavanagh and Carlos Valdes as full-time cast. For me, Tom is as much The Flash as Grant Gustin and so his absence will be felt in Season 8.

Speaking of Season 8, The Flash has been renewed and will start debuting new episodes next month. It will be interesting to see what they look like without these two long-time cast members. It might be a signal that the end is nigh and judging by the reaction from fans that might not be a bad thing.

The Flash: The Complete Seventh Season is now available on Blu-ray and DVD.