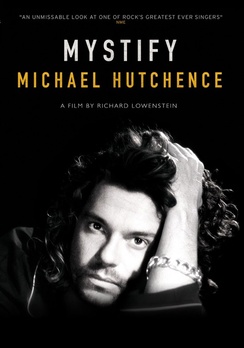 What is it about rock stars and tragedies that seem to go together like peanut butter and jelly? Whether it's plane crashes, drugs, or taking one's own life, brilliant musical artists meet their untimely end prematurely at a far greater rate than their contemporaries.

We all know about plane crashes, drug overdoses, Mama Cass' purported ham sandwich, and the infamous "27 Club," but some of music's tortured souls are all but forgotten. Not every singer who died tragically gets a big-budget Hollywood film made about them, but that doesn't mean that we shouldn't remember their legacy as well.

This new documentary is a powerfully intimate and insightful portrait of the internationally renowned INXS frontman, Michael Hutchence. Through previously unseen home videos from the deceased rock star and his friends and family, this film gives fan an up-close and personal look at the musician's life.

I was never really an INXS fan growing up as my musical taste buds didn't fully develop until the 1990s, but I was aware of the band and my appreciation for Michael Hutchence grew after he died. My earliest musical tastes were cemented more in punk and then later grunge so Australian new wave wasn't really up my alley then.

And yet, it is impossible to downplay the band's impact on the music world. They have sold the second-most amount of records in the United States among Aussie bands behind AC/DC. Their lasting legacy on bands can still be found to this day and Hutchence's signature voice still resonates whether it's Tame Impala or Wolfmother.

Given that I only had a working knowledge of INXS before this review, I was what you would call a tabula rosa reviewer in that I would be the most basic viewer they could expect to get. Sure, the true INXS fans would be buying this documentary, but how would his life translate to the uninitiated?

I'm happy to report that Mystify: Michael Hutchence not only goes in-depth into he troubled musician's life, but it also provides a bit of history on INXS' formation and explosion on the music scene. The decision to solely use video footage and not interstitial interview footage is a wise one as it immediately plunges the viewer into Hutchence's life.

The voices of those close to the singer narrate his life and fill in the empty spaces between the music and gives a haunting foreshadowing to the tragedy that lies ahead. But, long before, we get to the end days, the film lingers on the music and loves of Michael's life. Many of the women that he shared his life served as inspiration for his art and it's only fitting that the movie gives viewers a peeping tom's viewpoint into the rock and roll lifestyle.

I wasn't prepared for the sequence involving Kylie Minogue, as I mentioned I wasn't all that familiar with Michael's life, but she immediately injected life into the film and by extension one can assume Michael's creative spirit. It certainly felt that their breakup was indeed a turning point in his life and one that started the inevitable spiral towards his tragic demise.

I felt that the most impactful part of Mystify: Michael Hutchence was the time it spent on his accident that lead to his brain damage. This part of his life was completely shrouded in darkness while he was alive and it's only starting to be understood for the role it may have played in his death.

You only have to look at the NFL and the research that is being done on CTE and its link to depression and suicide to realize that brain damage has an enormous impact on personality. They say that hindsight is 20/20, but in the claims made by the rest of the band concerning Hutchence's behavior as they recorded what would become their last album, you can see that the signs were there of the debilitating spiral that was unraveling.

Whether you're a diehard INXS fan, or like me, just now discovering the brilliance of this band, you will be moved by the passion that oozes off of the screen of this film. Mystify: Michael Hutchence is a wonderful rock documentary that highlights both the highs and lows of a troubled artist's life.

One thing that I should mention is that special features are both robust and plentiful. There are sections that were excised from the final film but go in-depth on Michael's acting career and early days in the band that would later become INXS.

Mystify: Michael Hutchence is now available on Blu-ray and DVD.