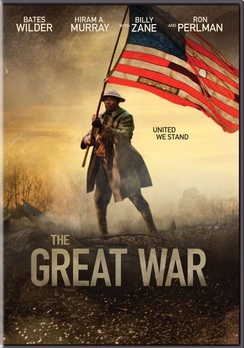 It's only fitting that The Great War is set for release during Black History month on a the first street date following the Oscars. Of course, had the Oscars gone a bit more to script, then The Great War would have been helped by a nice little Oscar bump from the success of 1917.

Unfortunately, things don't always go as planned. Parasite was the big winner Sunday night and World War I movies continue to be overlooked in favor of stories of conflict set during World War II or Vietnam. What 1917 did remind us of though is that there are countless forgotten moments from the original Great War that deserve a modern retelling.

In The Great War, a regiment of daring African-American soldiers is caught behind enemy lines as the war approaches its final days. When one of their ranks escapes back their headquarters, he is ordered to join a select group of white soldiers to lead a rescue party to seek out the survivors.

I have been ravaged by the flu for the better part of the last week, so my thoughts on this movie might tinged by medicine head, but I really enjoyed The Great War. Unlike the traditional big budget war movie, such as 1917, this one is a more intimate look at the emotions of war and the camaraderie that is built in such tight quarters.

Racial tensions between white and African-American soldiers probably weren't as dramatic as they were later in the century, but this pivotal moment in time provides a unique case study on the intricate racial relationship. I had a social psychology professor in school who would famously say (heck, she might still famously say it) that the easiest way to end all global wars would be for aliens to land on Earth.

This scenario is certainly an extreme example of team dynamics, but the underpinnings are the same. The enemy of my enemy is my friend, or our little tribal disputes fall by the wayside when confronted with larger stakes. So too, while there may have been general racial discord back in America that was beginning to boil over to the events of the 1960s, the looming specter of the Central Powers was enough to convince combatants to set aside their differences.

In The Great War, these internal debates are highlighted brilliantly in the banter between Ron Perlman and Billy Zane that is just a microcosm of the same emotions running rampant along the Allied lines. In the end, the love of country wins out and lessons are learned, even if many of these sentiments would soon be lost on the combatants as the fog of war fades from their memories. At least for this one moment in time, everything else is set aside for the common oath to a singular flag.

I wish that I could say that things have improved over the intervening 100 years, but as much progress as we have made on racial equality, there is a growing sense of racial superiority that is being fanned by the current political landscape. That's a fancy way of saying that more people need to watch The Great War and realize that we are all citizens of Earth and should be treated equally.

Unfortunately, I don't see any sign of aliens landing anytime soon, so this mess is something that we will have to clean up together. While The Great War is far from the epic in scope films that we generally see on the World Wars, the intimate scenes allow the audience a more direct line of sight into the director's heart. It's clear that Steven Luke is passionate about the subject matter and the lessons that he hopes to impart upon his audience.

The Great War is a film that is easy for the pundits to jump all over as its modest budget is apparent in almost every scene, but don't let that deter you from checking it out. It's a very personal look at a struggle that we continue to deal with to this day and one that we clearly need to learn from. There are some great performances and the message is abundantly clear. The color of your skin does not in any way measure your level of patriotism.

The Great War is now available on Blu-ray and DVD.