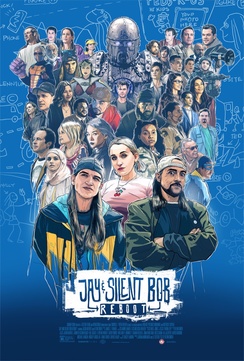 In early 2018, Kevin Smith suffered a heart attack. Not one of those Dick Cheney every other week type of cardiac arrests, but the infamous "widow maker." Thankfully, the near-death experience did not end with the filmmaker's early demise, but rather inspired him to go back to his roots and breathe new life into his beloved View Askewniverse.

For the uninitiated, the View Askewniverse is a term used by fans of Smith and the filmmaker himself to refer to his burgeoning film catalog that often shares characters over several films. Think of it as the Marvel Cinematic Universe when Iron Man was still in his iron diapers.

While films such as Clerks, Mallrats, Chasing Amy, Dogma, etc. are all hilarious on their own merits, they achieve a higher order of comedy when taken together as a multi-generational look at a very specific segment of the population, the 1990s slacker. Much like the ballyhooed Up series of documentary films by Michael Apted, the latest View Askewniverse film was a chance to catch up with an old friend.

As a filmmaker Kevin Smith has grown over the years and as his podcast empire took off, he became less interested in going back to the well and his projects allowed him to show off his growth as a storyteller. Films such as Red State, Tusk and, yes, even Yoga Hosers displayed a much more mature filmmaker, even if the subject matter still remained mostly in the realm of dick and fart jokes.

In fact, I would argue that Red State has more in common with Jordan Peele's breakout hits Get Out and Us than Smith's early contributions. And yet, as far as Kevin Smith strayed away from his bread and butter, we all felt that it was only a matter of time before jumped back into the View Askewniverse with both feet.

Smith even jokes in Jay and Silent Bob Reboot that he was able to guilt his star-studded ensemble cast to reprise their earlier roles or create new ones for his latest endeavor. But jokes aside, I think Smith's brush with mortality served as a wakeup call of sorts that he still has a lot to say about the slacker counter-culture that he helped to usher in. Much like his characters, he has grown older, started a family and has come face-to-face with death and survived to tell the jokes.

For Jay and Silent Bob Reboot, the stoner icons are back and they find themselves back on the road to Hollywood to thwart the reboot of the movie Bluntman and Chronic, which they failed to stop in Jay and Silent Bob Strike Back. This time, the pair are wiser and older, but will they be able to avoid the same pitfalls that sidetracked them on their earlier mission?

When I first heard about Jay and Silent Bob Reboot, I was as skeptical as anyone about it despite being such a massive fan. It reeked of a cash grab and a rash decision following the less than stellar response to his last film Yoga Hosers. As one of those that appreciated the new trajectory of his career, it initially felt like a step back. Then I saw the first trailer and it made perfect sense.

By the time that I sat down to watch it on the Jay and Silent Bob Reboot Roadshow here in Nashville, I was confident that I was going to see 90 minutes of one long running joke, but it was so much more than that. Sure, there are specific beats that line up almost perfectly with Jay and Silent Bob Strike Back, but Reboot is so much more than just another Hollywood reboot that the film relishes in skewering.

No, Jay and Silent Bob Reboot is an emotional tour de force (I always wanted to use that term to describe a Kevin Smith film) that truly delivers its own message that is both consistent with his earlier work and yet somehow touches you on a much deeper level. After seeing it now four times, I still find myself catching little jokes here and there and insight that I completely whiffed on in previous viewings.

Much like in Chasing Amy, Smith saves all the best lines for Ben Affleck. The pair patched up their rocky relationship in time for this film and I am not speaking in hyperbole when I say that Jay and Silent Bob Reboot would be half the movie that it is without Affleck's involvement. His Holden McNeil character is one of those classic cinematic character ala Professor X that is able to pop in from time to time and dispense invaluable advice.

In fact, there is one piece of dialog spoken by Holden that is so true and piercing to the soul that I am seriously considering it as my next tattoo. In one fell swoop, Kevin Smith is able to check in and provide closure on a bevy our favorite characters, and yet, there is still plenty of fodder for future films.

During the Roadshow Q&A, Smith indicated that Clerks III will finally see the light of day after a recent rewrite convinced lead Jeff Anderson to return to the Quik Stop. It's certainly not my place to give up the goodies, but what Smith shared with us about the story is truly fascinating and the logical next step for his characters to take.

As one of the great champions of physical media, Kevin Smith did not let us down in terms of bonus features. While the specs on the package might only list four special features, they are quite dense. Both the Cast Interviews and the Kevin and Jay interview the Cast & Crew featurettes add up to over an hour of additional content.

With each interview, it's pretty apparent that these talented individuals who have all gone on to enjoy phenomenal success in their own right have a genuine love and appreciation for Kevin. He might joke that it took a heart attack to bring them all together again, but I'm thinking that they would all gladly drop what they are doing to make more funnies with their good friend.

I have been fortunate to meet and interact with Kevin Smith several times and he is one of the most genuine and nicest people you will meet, celebrity or otherwise. This authenticity oozes out of his films and it's probably a main reason for his success. Well, that and his amazing ability to write funny and poignant dialog that always transcends the potty humor that it's often mistaken as.

I will say that there is one scene in Jay and Silent Bob Reboot that is almost a direct lift of the "Always Be Closing" moment in Glengarry Glen Ross. It's rather telling because ever since Clerks came out, Kevin Smith has been hustling from gig to another. From movies to merchandise to podcast, he has always found a way to make himself and those around him money.

Blake would be proud. Kevin Smith has earned his coffee because he's definitely a closer.

Jay and Silent Bob Reboot is now available on Blu-ray and DVD.