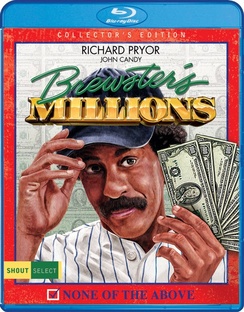 When Brewster's Millions came out, I was 11 and it instantly became one of my favorite films of all time. John Candy was my favorite actor at the time and my parents had introduced me to Richard Pryor a couple of years earlier and I was hooked.

What can I say, we were early cable adopters and my parents were very progressive. Either that or they didn't think a little raunchy comedy was bad for the soul. They were right.

What I didn't know at the time is that this version released in 1985 was only the latest adaptation of a novel from George Barr McCutcheon. In fact, I didn't watch the 1945 version until college and I was blown away by the realization. But I really shouldn't have been.

The story of excess and indulgence and the follies that they bring is a timeless tale that is as topical today as when the book was first published. In this latest version, Pryor minor league baseball pitcher who inherits a fortune, but there's a catch. In order to earn the full $300 million inheritance, he has to spend $30 million in 30 days.

I have to admit to being a bit nervous when I clicked on the Blu-ray because this was one of those touchstone films for me when I was young. It helped to shape who I am and my fondness for cheesy comedy. So, you can forgive the anxiety as I wondered if the film would stand the test of time. Even more pressing, would these comedy geniuses still be as funny 35 years later?

I'm happy to report that not only does the film age well, but it's as relevant today as at any point in the intervening 35 years. Given the acidic political landscape we face today, Montgomery Brewster's "None of the Above" platform would be a welcome message for a population that is very much divided on every issue save for their displeasure and distrust with politicians.

Sadly, both Richard Pryor and John Candy were taken away from us far too early and their absence has been palpable on the comedy front. They were two pillars in the genre and this rare team-up is the only movie that we have from them together. It's too bad because they were both brilliant and showed comic chemistry that could have carried many more films to box office glory.

The fantastic thing about this latest version of the film is that it's a Shout Select release and we have been touting this line of special collector's editions for a bit now and Shout! Factory absolutely knocked it out of the park. There is a new audio commentary and an interview with the writer that unearthed new insight into the movie for me. It also includes the 1945 version that I mentioned earlier, so no longer do you have to wait until college to dig up this classic version.

Overall, the movie was quite the journey down memory lane and really brought back a simpler time when my own naivety was born out of my young age. Watching it again 35 years later allowed me to revisit my youth, even if just for a couple of hours.

Brewster's Millions is now available as a Shout Select Collector's Edition Blu-ray and is well worth the investment to own this timeless film in such a venerable package.