Review: Liam Neeson goes out with a bang in 'Cold Pursuit' 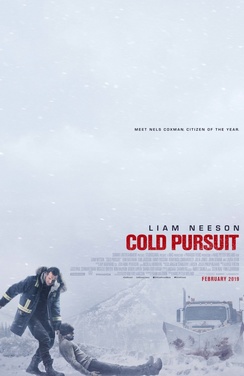 It is incredibly hard to make it in showbiz. Few actors are lucky to make it and even fewer are able to find a second life in a completely different genre. Enter Liam Neeson. Thanks to Liam some unexpected actors are suddenly finding later in life success in the action genre.

It all started with a little film called Taken and the rest, as they say, is history.

Liam has stated that Cold Pursuit will be his last action film and judging by the film itself, that's a shame. Of course, judging by the comments that got him in hot water while he was out promoting the theatrical release of Cold Pursuit, Hollywood might be OK with allowing this movie to be his action swan song.

Cold Pursuit follows an upstanding citizen of a small Colorado town whose life is devasted when his son is murdered. Naturally, he takes matters into his own hands to make sure that those responsible for his son's death get what they deserve.

It truly is unfortunate that Cold Pursuit will forever be tainted by Liam's wacky interview confession because, on its own merits, the movie is a brilliant action film with dark comic elements. In many ways, it reminded me of a lighter John Wick.

Of course, don't let the comedy fool you. There is plenty of brutality here that is not to be missed. If you liked True Romance and wished that it would have hooked up with Fargo, then Cold Pursuit is the illegitimate baby from that coupling.

There's really not much that I can add to Liam's performance as he's perfected his particular brand of geriatric action hero and he's on top of his game here. He does show a bit more vulnerability than normal when an adversary's young son is able to make a connection with his character that provides a rare moment of humanity in a world that is otherwise overrun with debauchery.

I will add that Domenick Lombardozzi is quite the standout with his rather unique twist on the traditional hitman. He provides a level of depth for his character that you don't normally find in this type of cardboard cutout. It's hard to ever have an emotional connection with a "bad guy," but Domenick provides several surprising moments that resonate with the audience. In an otherwise bloodbath of a movie, his performance stands out as perhaps the most humane.

If you enjoy these types of films, you will be hardpressed to find a better option this week. The 4K UHD features a strong Dolby Vision transfer that showcases the HDR. Many of the scenes are set against the pristine white backdrop of Colorado ski country, so the contrast and tones are important. The result is a pristine image upon which plenty of blood is shed.

The Dolby Atmos audio track is superb and is featured on both the 4K UHD and Blu-ray. With plenty of bullets flying, the audio track is an integral part of the package and their attention to detail shines through.

I thought that the bonus features were quite nice for an initial release. Most times these days studios skimp on the extras in lieu of a bare-bones offering, but that's not the case here. The deleted scenes and featurette offered a nice complement to the quirky bloodbath onscreen.

Finally, I would be remiss if I didn't recognize the performance of Emmy Rossum. I admit that I haven't watched her in Shameless, but if this is any indication of her work in that show, I really need to check it out. She plays the go-getting small-town cop to perfection and she provides plenty of comic relief thanks to the interactions between her and her partner.