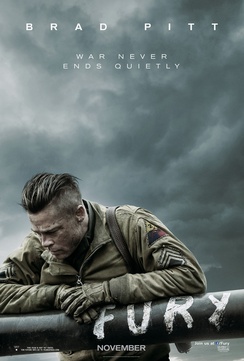 Sony Pictures has always been aggressive when it comes to embracing new technology. They were the first to embrace Blu-ray over rival HD DVD and we all know how that turned out (much better than Sony's choice of Beta over VHS). They have fully embraced 4K UHD Blu-ray and were one of the earliest studios to mine their catalog for films that would be enhanced by the new format.

With Memorial Day just around the corner, Sony dipped into its catalog to bring two movies that highlight different periods of armed conflict involving the United States. The Patriot features a man who is drawn into the American Revolution after initial hesitation when his family is threatened. Meanwhile, Fury follows a Sherman tank crew during the final days of World War II that is looking to make a final strike at the heart of Nazi Germany.

Since the birth of our nation, the armed conflicts that we have participated in has defined who we are as a country more than anything else. Whether it's the underdog spirit of the American Revolution or the reluctance to enter into World War II, the American dream has persevered and been impacted by these conflicts.

As Memorial Day is the official holiday to remember those service members that have died in active combat, there isn't a better time to pick up these two modern war classics. The Patriot was released in 2000 and Fury hit theaters in 2014, but their impact has already placed them in the esteemed company of such military masterpieces such as Platoon, Saving Private Ryan, and Patton.

War films have been an iconic fixture in American films and it is only fitting that these two films would be given the 4K UHD Blu-ray treatment. They are great films in their own right and given that they were both shot in 4K means that the process to bring them to 4K UHD was relatively easier than older war films.

Unfortunately, Fury is a film that is somewhat forgotten in the pantheon of great war movies. Perhaps, this is simply a recency bias as it was released only four short years ago, or maybe there's a bit of Shia LaBeouf backlash, but whatever the case, it's a bit of a travesty.

Director David Ayer brings his gritty realism to the European theater during the end days of World War II and it's a perfect match. Lead star Brad Pitt is more than serviceable as Wardaddy, the army sergeant in charge of a ragtag group of soldiers bound on one last dangerous mission behind enemy lines.

While it's only been a handful of years since it debuted, the film holds up quite well. The success that some of the lesser castmates such as Logan Lerman and Jon Bernthal have enjoyed since they filmed this movie gives a re-watching a bit of nostalgia. Bernthal, in particular, is spectacular in this film and it's a bit criminal that he isn't a full-blown A-list star yet. 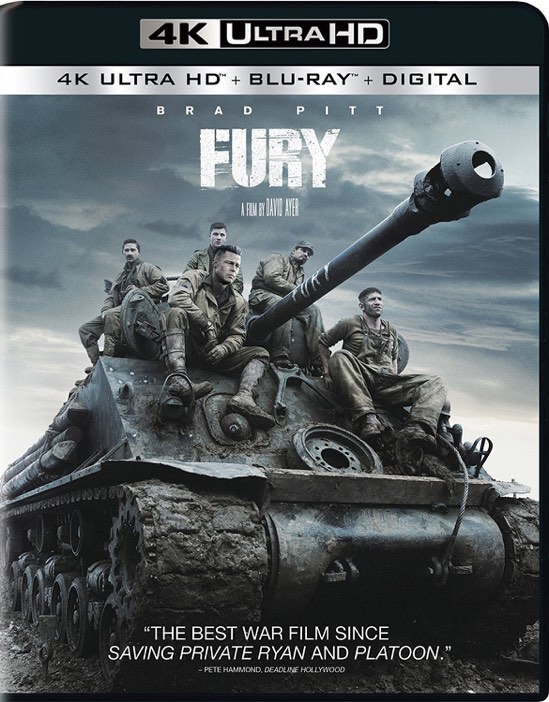 The gritty realism of the film is a great match for the 4K video transfer with HDR. The colors are bright and vibrant and the contrast among the dingy blacks has never been better. You truly feel as though are in that tank with them.

Likewise the Dolby Atmos audio track really helps to convincingly bring the battlefield into your living room. This hyper-realistic score heightens the anxiety of the audience and gives the viewer a truly visceral experience that propels the action with renewed authenticity.

What I really enjoyed about this 4K UHD Blu-ray was the attention paid to the special features. Despite having been released on Blu-ray with a copious amount of bonus features four years ago, Sony went back to the vault and squeezed out four new featurettes and a "Tanks of Fury" Documentary that played on TV around the original theatrical release of Fury.

The end result is a massive version of the film that should be a standard-bearer for re-releasing catalog films in this new format. Not only was the upgraded video and audio experience worth an upgrade, but the additional content will satisfy even the most-discerning World War II buff. With Memorial Day and Father's Day right around the corner, I foresee many people buying Fury as a gift for their loved ones.

The Patriot takes place at the other end of the American war history timeline when our country was still in its infancy. When it was released in 2000, I thought The Patriot was criminally underappreciated. There are plenty of films set around the time of our country's independence, but surprisingly there are relatively few that spend more time on the battlefield than in the minutiae of trying to get our country started.

When it was released, Mel Gibson was at the top of his game and at least six years from his fateful DUI arrest that would haunt the actor to this day. The film also features a young Heath Ledger and he would use this performance to springboard himself to great acclaim before his tragic death eight years later.

The film grossed over $100 million at the box office and was directed by Roland Emmerich, who had just made a name for himself with Independence Day a couple of years earlier. In other words, this film's trajectory was almost completely opposite that of Fury. 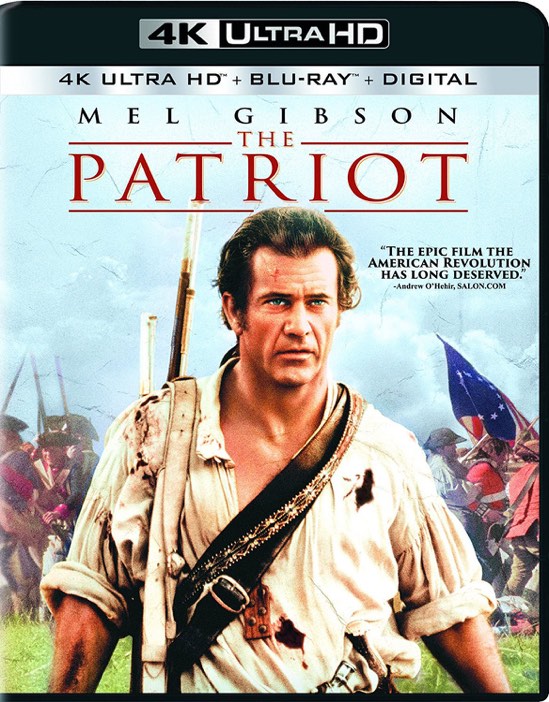 The Patriot was considered a veritable hit at the turn of the century, but time has been unkind to it. With this in mind, I was intrigued as to whether the film would hold up after almost two decades, or if the events that transpired since its release cast a dark shadow on the film?

I am happy to say that much like Braveheart, The Patriot is a film that transcends Mel Gibson and delivers just as powerful of a message today as it did when it was first released. That being said, it is impossible not to be swayed by Heath Ledger's performance given the tragic events that followed this film. In many ways, I think a re-watching actually augments his performance in this movie and gives a new experience for the audience.

While the video and audio tracks aren't quite as pristine as the transfers from the newer Fury, the added HDR really makes the lush colors of The Patriot jump right off the screen. Also, the Dolby Atmos soundtrack is a massive upgrade over the track on the Blu-ray. During the battle scenes, in particular, you can truly pick out the differences between the two tracks.

In a similar fashion to Fury, Sony went back to the archives and unearthed a bunch of new content that wasn't previously available. They included seven deleted scenes, a new featurette and audio commentaries among many other little goodies. For even casual fans of The Patriot, the 4K UHD version is a must own in that it also includes the previously available Blu-ray. The biggest draw of the Blu-ray is that it contains the extended version of the film while the 4K UHD only has the theatrical version on it. It does seem like several of the scenes added back to the extended version are included in the deleted scenes section on the 4K UHD, but it's always good to have both versions depending on your mood.