Monday Mixer: It's a 'Wonder'ful world 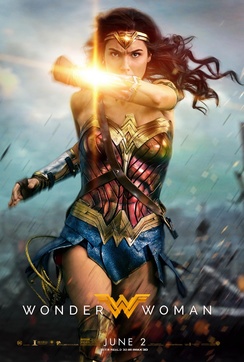 So, is there anything big coming out this week? Oh yeah, that's right, Disney's live-action extravaganza Beauty and the Beast is making its way to DVD and Blu-ray this week, but it's still playing in over 500 theaters across the country.

While I know that you all want to talk about Disney and their uncanny knack of being able to print money at the box office, the bigger news is the return of the Monday Mixer. Actually, I'm a bit surprised that this is a story, but I've gotten a fair amount of emails and tweets inquiring about its fate.

Now, there isn't anything nefarious afoot, but there is something going on behind the scenes. I can't really talk about it too much yet, but in the coming weeks or months, there might be some big things going on here and, yes, that has taken up a lot of my time, but it's not an excuse. But, in the long run, I'm pretty sure that you all will enjoy these new developments.

But enough with my excuses, let's just get to the real stuff that matters, ok?

So, before we get into this weekend's results, I suppose it would make some sense to look at the last six weeks at the box office. The biggest story would most likely be the success of Guardians of the Galaxy Vol. 2. The film opened to a massive $145 million and its $355 million box office has already surpassed the original film's total box office, but despite all that, there's a sense that it's underperforming.

I know, cry Disney a river, but we all thought that it would push the envelope on $400 million and it's looking like it will end up around $380 million. Don't get me wrong, that's amazing, but we all sort of had it pegged to finish up higher than Beauty and the Beast and it will end up over $100 million behind it.

Alien: Covenant opened up a bit on the small side with $36 million, but the fans seemed to have taken to it much more than Prometheus. That said, Prometheus earned over $126 million at the box office and Alien: Covenant is on track to finish with $80 million. I know that Fox was hoping for a performance on par, or even superior to that of Prometheus, so I guess the future of that franchise is a bit up in the air.

But, let's turn our attention to this past weekend. There was one film that many were curious to see how it would perform. And no, it wasn't Captain Underpants. I'm not sure if there has been any film in recent memory that has been released amid so much scrutiny as Wonder Woman. In the last month, the dialog has been about the lack of marketing for the film, but when push came to shove, Wonder Woman proved that she belonged with the big boys.

Wonder Woman opened up with $100 million which was a record opening for a female-directed film, but more importantly, that number blew away even the most rosy of expectations. After last year's lackluster reviews of Batman v Superman: Dawn of Justice, many had pinned the hopes of the future of the DC Expanded Universe (DCEU) on Wonder Woman. Whether that was fair or not, the critical and fan response has been one that leaves a lot of hope for the future of the DCEU.

Interestingly, the bad reviews (and let's face it, the subpar action on the screen) sank Batman v Superman: Dawn of Justice pretty quickly and it only ended up with $330 million. At this rate, we expect Wonder Woman to outperform its predecessor and end up closer to Guardians of the Galaxy Vol. 2's $375 million.

Speaking of films that over-performed this weekend, Captain Underpants delivered a rare win for Fox at the box office. Most industry estimates had pegged the animated film to open closer to $15 million or so, but it ended its opening frame with $23.5 million. I can tell you that Fox wasn't banking on this film making $100 million at the box office, but that number now is very much in play and it should end up right around $125 million unless Cars 3 absolutely cannibalizes all of its business in a couple of weeks.

Speaking of cannibals (OK, that's a bit of a stretch), Pirates of the Caribbean: Dead Men Tell No Tales had a massive drop-off in week two. The film only managed to to drum up $21.6 million to bring its two-week total to $114 million. At this point, Dead Men Tell No Tales is well on its way to becoming the lowest-grossing film of the franchise, and it's not going to even be close.

Currently, On Stranger Tides, holds that distinction with its $241 million box office. At this current rate, Dead Men Tell No Tales will be a longshot to make it to $175 million. Previously, none of the original three films failed to reach $300 million at the box office, so I think it's safe to say that this truly will be the last Pirates of the Caribbean film.

With all of that in mind, I didn't want to scrap our June the 4th update entirely, so here is Screen Crush's interpretation of The Last Jedi trailer had it come out in 1983. Enjoy!