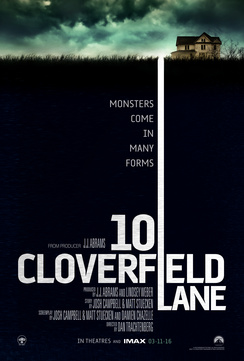 If you weren't convinced that J.J. Abrams is a master of subterfuge, then I present the latest evidence, the just-released trailer for 10 Cloverfield Lane. Yes, for those whose heartbeat suddenly quickened, that is the same Cloverfield that had its trailer debut mysteriously in 2007 in front of Transformers.

At the time, nothing was known about Cloverfield and many would argue that this surprise trailer was the best thing about the theatrical release of Transformers. At the time, it was untitled and only 1-18-08 appeared on the screen at the end to mark to signify its release date.

From this snippet, seven months of speculation and excitement continued to build until the crescendo in mid-January 2008. You have to realize that this was during the height of Lost's popularity and J.J. was being touted as the Spielberg heir apparent. Of course, it would be seven years before those very high acclaims would come to pass, but I think most of you will agree that the success of The Force Awakens has catapulted Abrams to a whole new stratosphere.

So, it's only fitting then that Abrams would use the massive blockbuster as a smokescreen for his smaller "sequel" to Cloverfield. Last night, during preview screenings of 13 Hours, audiences were surprised with this amazing trailer.

Yes, the use of Cloverfield was intentional as Abrams confirmed in a statement from Paramount.

The idea came up a long time ago during production. We wanted to make it a blood relative of Cloverfield. The idea was developed over time. We wanted to hold back the title for as long as possible.

So, how exactly do you hold back the title of one of the most recognized films in the genre in the last dozen years or so? Well, it helps that everyone was looking one way while he was busy prepping this film the other way. I'm willing to bet that not a single person asked him about a Cloverfield in the press lead up for The Force Awakens.

It also helps that the film was already known, albeit by a different name, and it sounded nothing like Cloverfield. The film was known by the innocuous name of Valencia and before that The Cellar. We even had the brief synopsis of the film and it was as different from Cloverfield as night and day.

After a car accident, a young woman comes to in an underground cellar, where most of the action takes place. She fears she has been abducted by a survivalist, who tells her he saved her life and that a chemical attack has left the outside world uninhabitable. Uncertain what to believe, she decides she must escape, whatever dangers she may face outside.

Yeah, that's about as far from a monster/alien attack film as I can imagine. And yet, the trailer looks phenomenal. Take note young scribes, this is how you craft an impressive movie trailer. Before yesterday, I had no idea what 10 Cloverfield Lane was and now it's on my short list of must-see films in 2016.

To give you an idea of just how far under the radar this film was flying, Tim, Dannette and I had our sleeper draft yesterday and Tim took this film in the first round (well, he took Valencia) and I had to look it up to figure out which film it was. Tim will have more on it next week, but suffice to say, I think he has already won the 2016 sleeper contest.