'Warcraft' has a trailer because Dungeons & Dragons is no longer cool 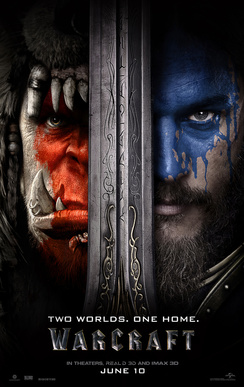 Humans and Orcs and Ogres? Oh, my!

I'm just going to lay it on straight for you. When it comes to most fantasy and sorcery stuff, I take a hardline Randal stance. I've never been mesmerized by their charms and I'm proud to declare that I've never rolled a die with more than six sides.

Before you light your torches and grab your pitchforks and go all ogre hunt on my backside, I'm not disparaging this lifestyle at all. It's just not my cup of tea, but I get the appeal and I can appreciate outstanding entries in the genre like The Hobbit and Lord of the Rings films. Warcraft is a huge multi-platform franchise with a massive audience and as such, I have to take notice when it branches out into the film world.

There have been teases this week, but today we finally got the full trailer for Warcraft. As an outsider to your world, I can say that this trailer certainly got my attention. Much like the trailer for Alice Through the Looking Glass, the world is bright and vibrant and mostly CGI. And yet, the story is at once relatable due to recurring themes from life such as what I'm calling "Orc Moses" (trust me, you'll understand after you watch the trailer).

I have no basis to judge whether the trailer is faithful and inspiring to those who live and breath in this Warcraft world, but perhaps you can enlighten me in the comments below. As an outsider looking in, the film looks epic in scope and the story is one that should have no problem spawning sequels if this one takes off.