Monday Mixer: 'Maze' finds its way to the top 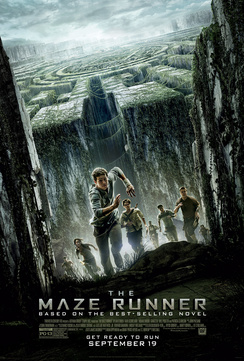 September continues to fly past and before you know it, the horror films will be all the rage. That isn't to say that there aren't a few scary films at the box office now, both intentionally and other wise. This changing season is always one that I relish. The air has a certain crispness in it that gives you a window into the bitter cold months ahead, but yet there is still plenty to do before we get there.

That's how I have been feeling about the box office lately. It seems that studios are just biding their time until the glut of horror films runs its course in October and we can get to the good stuff in November and December. Interestingly enough, I saw a film this weekend that I enjoyed thoroughly (more on that later naturally) and I'm really looking forward to Gone Girl on October 3.

So, maybe the next six weeks aren't a lost cause. I know what I won't be watching and that's all those possessed doll horror films or board games are the portal to another dimension flicks that are all the rage these days. I'll save my money. Sadly, the days of seeing borderline films at the local megaplex are gone. My movie-going adventure this weekend cost me a total of $23.00. That was just for the ticket for me, a drink and popcorn. At 2:00 in the afternoon. This is ridiculous and if Hollywood wants an answer as to why people aren't going to see films like they once did, this is a big reason.

I remember the days when $10 would purchase the same amenities for a matineÃ©, but those days are long gone. For that price, I can buy the Blu-ray and watch it at home with the whole family and we can provide our own snacks. But I better get off my soapbox because I feel a full-on rant brewing.

So, let's talk some Mixer, shall we?

There's good news for all of you Hunger Games fanatics out there, the teen dystopian future phenomenon is far from dead. Case in point, The Maze Runner opened up with $32.5 million at the box office this past weekend. That might not sound Earth-shattering nor in the same league as The Hunger Games, but it's good enough that Fox immediately announced that its sequel, The Maze Runner: Scorch Trials will be fast-tracked for a September 18, 2015 release.

Because, you know, there aren't any other big movies coming out in 2015. If its business tracks other recent teen dystopian future films, then The Maze Runner will most likely run out of steam right before it's set to cross the $100 million threshold.

The two other new films in wide release scooped up second and third place with $13.1 and $11.9 million respectively. For Liam Neeson, the performance turned in by A Walk Among the Tombstones might just signal the beginning of the end of his unexpected action career arc. Not that $13.1 million is anything to scoff at, but it's just the latest in a declining return on his action films.

As for This is Where I Leave You, $11.9 million is a decent opening, even if studio expectations were a bit more aggressive. It looks like a funny ensemble piece, but it's hard to see what demographic they are targeting with a cast whose audience is so diverse. On the one hand, you have the geriatric set who still loves Jane Fonda, while new Star Wars recruit Adam Driver brings in the younger, hip crowd.

It seems that the broken hip crowd were the only ones who showed up though and it will be lucky if it hits $40 million. A Walk Among the Tombstones will struggle to make it to $45 million.

As for the film that I saw this weekend, I'm happy to say that my $10 is part of Tusk's opening salvo of just under $900,000. For Kevin Smith's latest, which opened only on 600 screens, that number was pretty much on target. Given its $3 million budget, Tusk is certain to turn a profit and it should end its run earning back just shy of its budget.

If you're curious as to what I thought of the film, stay tuned because there just might be something up on it later today or this week.

The latest jab from Snyder involved a storm trooper being arrested by Gotham cops.

Not to be outdone, I think it's safe to say that J.J. moved in for check mate with his response.

There are few things that I worry about with this film. Fincher will be awesome. Affleck will deliver just the right amount of smarminess. And Trent Reznor and Atticus Ross's score will be killer (no pun intended). You can hear a snippet below.

And this is why I hate Hollywood and the MPAA. Congratulations, you can make your film, but your notoriously potty-mouthed character only gets one F bomb and there will not be blood. I hate it that filmmakers are having their artistic visions neutered by something as arbitrary as a film rating.

Anyhow, you can catch the news on the "Meet the Movie Press" podcast which I've included below.

Speaking of podcasts, if you're a fan of our podcast, you'll be happy to know that Tim and I have decided to resurrect it. Our first show will hit this Friday and it will be much different that previous incarnations. It will be less structured and we will simply talk about two to three topics or films that have caught our attention recently.

Right now, our goal is to crank one out every other week, on Friday, so give us a listen and tell us what you think.

Until next week, mix well.