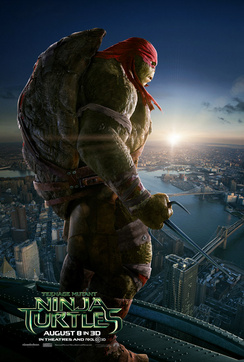 All you have to do is take one look at the latest trailer and you start to wonder if maybe, just maybe Bay is simply recycling footage from his earlier Transformers flicks in spots. The destruction is over the top and I'm pretty sure that I saw some huge robot balls in one shot. Maybe that's just me.

There are things to like about the new trailer. It seems that the turtles themselves are finally given a just treatment with the right amount of wit and action. Although this being Michael Bay, the action is ratcheted up a few degrees which will surely upset the traditionalists.

That, and we finally get an answer as to what happened to Edward Scissorhands. Teenage Mutant Ninja Turtles hits theaters on August 8.