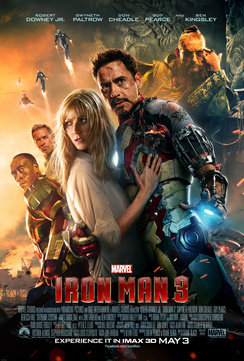 I can already hear you laughing at me. It is true that last week I said that I would improve on getting the MMM out in the morning. It's also true that I have failed you for yet another week.

Of course, it's still the morning when I write this, but I'm planning ahead so that I don't have to re-write this cold opening.

So, what did you do this weekend? I had to paint a room, which is fine, but not one of my favorite things to do. I would have much preferred to be sitting in a movie theater with the rest of America watching Iron Man 3.

We knew it was going to be big, we just didn't know how dig it was going to be. In a word, it was humongous. There's a reason that Hollywood hasn't soured on comic book movies and that's because they are still the hottest ticket in town.

You want to know the 411 at the box office, it's easy: Iron Man 3. The third Tony Stark film topped out with an opening weekend haul of $175.3, good enough for the second highest opening weekend ever. And hopefully enough to entice Robert Downey, Jr. to return for another installment or two.

What film still holds the top spot? I'll give you a hint, Iron Man stars in that film too. That's right, The Avengers is still the top dog with their impressive $207 million opening.

The Avengers went on to earn a ridiculous $623.3 million at the North American box office and similar success is in the cards for Iron Man 3. I wouldn't go so far as to predict that it will surpass $600 million, but it will almost surely surpass $500.

This sets up a nice box office showdown for later in the year when Catching Fire opens up. The first film in the franchise brought in a haul of $408 million but the typical sequel bump puts early estimates at $500 million for Catching Fire.

One thing is certain, Iron Man 3 has fired the first real shot in the Summer Box Office Battle and I don't think any other films will be able to recover enough to prove to be a worthy adversary. There are a lot of competitors out there, namely this week's The Great Gatsby and next week's Star Trek Into Darkness.

Gatsby is going to take a direct hit from Iron Man and will most likely drown in his wake to the tune of maybe $100 million. Star Trek Into Darkness will fare better and should hold its own, but they won't end up on the same field when Star Trek brings in about half as much as Iron Man 3.

I'm not sure it's even worth talking about the rest of the films as no other film was able to cobble together $10 million this weekend. For the sake of sanctity, Pain & Gain finished in second place with a measly $7.6 million. Their cumulative box office of just shy of $34 million puts it right on target to end around $50 million, which is where we said it would end up last week.

When Disney puts the call out to film makers to direct Star Wars: Episode VIII, I think it's safe to assume that Danny Boyle won't be getting a courtesy call. The Trainspotting and Slumdog Millionaire, Oscar-winning director puts the blame squarely on Star Wars for what we now see at the cinema.

He goes on to say that the "Pixarification" of films is the reason that it's becoming more and more difficult to find more adult fare in the cinema (see, he's Britsh). He also goes on to point out that he doesn't mean stag films, but rather films from the 1970s that were for an older audience.

To be honest, I agree with his sentiment even if his reasoning is off. I'm not sure that Star Wars is to blame as much as the monthly animated films that we see in theaters. The whole experience has become more family-friendly and with it more money flows to both the studios and exhibitors. Kids mean more concessions and more admissions.

Anyhow, listen to this interesting take.

Sorry folks, it seems that it was a slow weekend. Until next week, mix well!