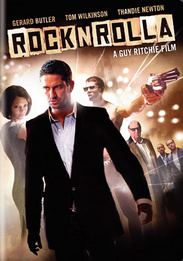 When a Russian mobster orchestrates a crooked land deal, millions of dollars are up for grabs, and all of London's criminal underworld wants in on the action. Everyone from a dangerous crime lord to a sexy accountant, a corrupt politician and down-on-their-luck petty thieves conspire, collude and collide with one another in an effort to get rich quick.

Gerard Butler stars as One Two, a street-smart mobster who has learned to play both sides of the fence. Two-time Oscar nominee Tom Wilkinson stars as the ruthless head mobster, Lenny Cole, part of London's old mob regime, which is quickly losing ground to the wealthier foreign mob. Thandie Newton stars as One Two's love interest, Stella, a smart and sexy accountant with ties to the underworld. Idris Elba stars as Mumbles, One Two's partner in crime and best friend. Chris "Ludacris" Bridges and Jeremy Piven star respectively as Mickey and Roman, two Americans trying to break into the music scene in London. Rounding out the main cast are Mark Strong as Archie, Lenny Cole's right-hand man, and Toby Kebbell as Johnny, a British punk rock star.