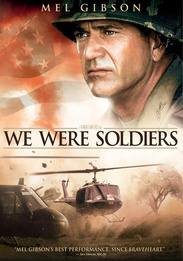 In a place soon to be known as The Valley of Death, in a small clearing called landing zone X-Ray, Lt. Colonel Hal Moore and 400 young fathers, husbands, brothers, and sons, all troopers from an elite American combat division, were surrounded by 2,000 North Vietnamese soldiers. The ensuing battle was one of the most savage in U.S. history.

Rated R for sustained sequences of graphic war violence, and for language.