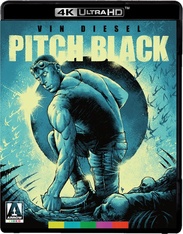 Marooned space-travelers struggle for survival on seemingly lifeless sun-scorched world. But when a titanic eclipse throws the planet into darkness, the world erupts with nocturnal life - and now the real battle begins... A crippled passenger ship crashes on a planet that has, seemingly, no other life and no periods of night. Among the survivors are JOHNS, a police officer ...RIDDICK, an escaped killer whom Johns is escorting back to prison ...and CAROLYN FRY, a docking pilot who feels responsible for the many lives lost in the crash landing. When night falls for the first time in 22 years, the planet turns lethal, erupting with nocturnal creatures. Danger comes from within the group of stranded survivors as well: Fry learns that Johns is a drug-addled bounty hunter instead of a cop, and Riddick seems to be plotting his own escape, angling to be the only human to get off the planet. With make-shift lights as their only weapon, the survivors must race from the crash site through a treacherous canyon - - confronting predators and their own personal fears to reach the ship, which is their only hope of escape.