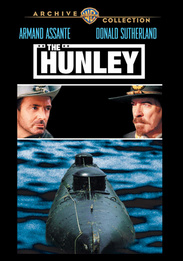 The fateful encounter of the Monitor and the Merrimack, history's first-ever battle of ironclad ships, was not the U.S. Civil War's lone naval milestone. Desperate to break the stranglehold of the North's coastal blockade, the South built and sent into war the hand-powered submarine CSS Hunley. Armand Assante (as Lt. Dixon, the sub's skipper) and Donald Sutherland (as Gen. Beauregard, the Confederate commander at Charleston) star in this fact-based tale of The Hunley and its crew. The ship is iron, engineered from a large steam boiler. The crew consists of nine volunteers, men destined to change the world forever in a submersible ship that was the first combat vessel of its kind -- and the last hope of the Confederacy.