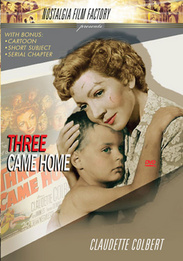 Claudette Colbert stars in this harrowing war drama based on the autobiography of American author Agnes Newton Keith. Trapped on Borneo when the Japanese invade the island during World War II, Mrs. Keith and her husband, a British administrator (Patric Knowles), are sent to separate prison camps with other American and British subjects. Mrs. Keith's camp is overseen by Colonel Suga (Sessue Hayakawa), who takes an avid interest in the American authoress. Despite his humanitarian views, he is helpless to intervene when she is subjected to torture, starvation, and humiliation at the hands of the guards. Told in agonizing detail, Three Came Home is an unforgettable film that portrays the ultimate triumph of the human spirit in the face of seemingly insurmountable odds.