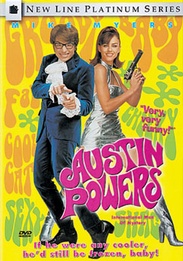 Austin Powers is a mod, 1960s British secret agent and self-proclaimed ladies man. Along with fellow agent Ms. Kensington, he battles Dr. Evil, a man intent on world domination. When Evil escapes and puts himself into orbit in his own cryogenic facility, Powers is put on ice.Decades later, Dr. Evil thaws out, steals a nuclear missile and plans to blackmail the United Nations with the help of Number 2. Powers is then thawed out and teamed with Kensington's daughter, Vanessa who's assigned to re-climatize Powers to the '90s. As Powers and Vanessa attempt tostop Dr. Evil, they must contend with his many assassins,a femme fatale, Alotta Fagina, and an array of robotic female vixens.