Courage And Conviction: The True Story 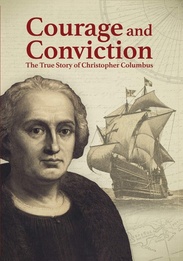 Courage and Conviction: The True Story of Christopher Columbus is a thorough exploration of the life and legacy of the fearless discoverer of America. Narrated by Academy Award-nominated actor Chazz Palminteri, this film cuts through the anti-Columbus narrative and reveals Christopher Columbus' remarkable life and accomplishments. Discover the origins of Columbus Day as a unifying holiday following the mass lynching of Italian immigrants in New Orleans, the KKK's role in opposing Columbus Day celebrations, and the lies and distortion in many of the revisionist attacks on Columbus' legacy. Courage and Conviction shows why Christopher Columbus remains not only a man worthy of admiration, but a noble icon of what it means to be a Catholic and an American.