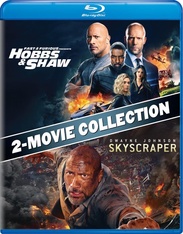 Fast & Furious Presents: Hobbs & Shaw:
Dwayne Johnson and Jason Statham return to their unforgettable roles as Hobbs and Shaw in this action-packed feature from the blockbuster Fast & Furious franchise! For years, hulking lawman Luke Hobbs (Johnson) and lawless outcast Deckard Shaw (Statham) have traded smack talk and body blows. But when cyber-genetically enhanced anarchist Brixton (Idris Elba) gains control of an insidious bio-threat that could alter humanity forever, Hobbs and Shaw must partner up to bring down the only guy who might be badder than themselves!

Skyscraper:
Former FBI Hostage Rescue Team leader and U.S. war veteran Will Sawyer (Dwayne Johnson) now assesses security for skyscrapers. He's on assignment in China when he finds the tallest, safest building in the world suddenly ablaze, and he's been framed for it. A wanted man on the run, Will must find those responsible, clear his name and somehow rescue his family, who are trapped inside the building, above the fire line.