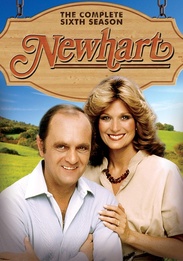 Season Six finds innkeeper, author, and television host Dick Loudon (Newhart) and his wife Joanna (Mary Frann) facing a whole new batch of comic misadventures as they contend with running the Stratford Inn as well as the oddball natives of their quaint Vermont town. However, their quirky companions- handyman George (Tom Poston), queasily cutesy couple Michael (Peter Scolari) and Stephanie (Julia Duffy), and those brothers in buffoonery, Larry (William Sanderson), Darryl (Tony Papenfuss), and Darryl (John Voldstad)-are there to ensure that even in their own inn, the Loudons will find no shelter from the storm of silliness that surrounds them.