The Man In The Iron Mask 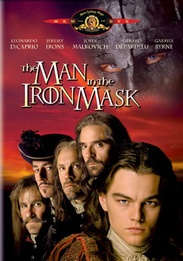 It has been many years since Aramis, Athos, Porthos and d'Artagnan fought together as the bravest and the best of the King's Royal Guards, known as The Musketeers. It is 1660 and France is starving. The once great King has been succeeded by his arrogant and cruel heir, King Louis XIV (DiCaprio). While at the Bastille, a mysterious prisoner has lived for nearly a decade encased in an iron mask. To save a nation, the Musketeers must reunite and embark on their most dangerous mission ever: to free the prisoner and unlock the secret of his identity. Only through this will they rebuild the kingdom.

Rated PG-13 for sequences of violence and some sensuality/nudity.