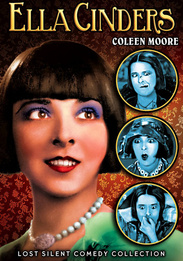 Ella Cinders is a slave to the incessant demands of her stepmother and stepsisters, cleaning up after them and servicing their every need. An announcement for a contest in search of Hollywood's newest star inspires Ella to try out. To the horror of her family members, Ella wins the contest. But when she arrives in Hollywood, she's told the contest was a complete hoax. Still determined to score a film role, Ella shows Tinseltown she's not about to abandon her dreams of stardom.

A conservatory-trained pianist, Colleen Moore was introduced to the silver screen in her late teens with The Savage (1917). She became a major box-office hit by 1927, bringing the "flapper" persona to life with her signature bob hairstyle. Handsome Arizona native Lloyd Hughes made his cinematic mark with famed silents such as Love Never Dies (1921) and the Mary Pickford film Tess of the Storm Country (1922). Vera Lewis enjoyed a prolific film career, beginning with silents in 1915 and making a successful switch to talkies. She was best known for her roles in The Iron Mask (1929) with Douglas Fairbanks and Four Daughters (1938) with Claude Rains. Initially an actor, Alfred E. Green directed numerous films throughout the silent and talkie eras, helming a few for Mary Pickford in addition to Dangerous (1935) with Bette Davis.