The Originals: The Complete First Season 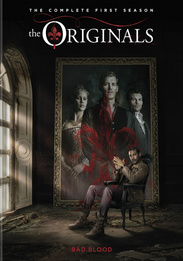 This sexy and thrilling new series from The Vampire Diaries executive producer centers on the Original vampire family and the dangerous vampire/werewolf hybrid, Klaus (Joseph Morgan), who returns to the magical melting pot that is the French Quarter of New Orleans  a town he helped build centuries ago. Acting on a mysterious tip that a plot is brewing against him, Klaus questions lead him to his diabolical former protÃ©gÃ©, Marcel (Charles Michael Davis), a charismatic vampire with total control over the human and supernatural inhabitants of the city. Determined to help his brother Klaus find redemption, Elijah (Daniel Gillies) follows Klaus and is soon forced to side with Marcels enemies. Meanwhile, Klaus and Elijahs sister, Rebekah (Claire Holt), must decide if shell join her brothers in New Orleans and help them to reclaim their hometown and all its extraordinary offerings. Phoebe Tonkin also stars, among others.