The Trip to Bountiful 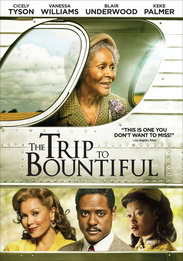 Carrie Watts (Cicely Tyson) begrudgingly lives with her busy, overprotective son, Ludie, and pretentious daughter-in-law, Jessie Mae. No longer able to drive and forbidden to travel alone, she wishes for freedom from the confines of the house and begs her son to take her on a visit to her hometown of Bountiful. When he refuses, Mrs. Watts is undeterred and makes an escape to the local bus station, where she befriends Thelma (Keke Palmer), a young woman traveling home. When Ludie and Jessie Mae discover she is gone, they call in law enforcement to help, but Mrs. Watts is one step ahead of them and convinces the local sheriff to help her on her journey home to Bountiful. Vanessa Williams and Blair Underwood also star in this television adaptation of American playwright and screenwriter Horton Footeâs TonyÂ®-nominated play.