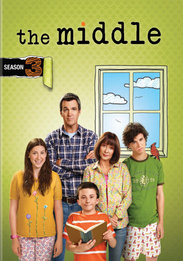 In Season Three of The Middle, the Hecks tackle the beginning of a new school year, a not-so-relaxing Thanksgiving, and an unexpected wedding. In the midst of it all, Frankie (EmmyÂ® winner Patricia Heaton) and Mike Heck (Neil Flynn) attempt to raise their kids with love and a solid Midwestern practicality. Axl, the eldest, is a jock slacker who eats the family out of house and home and walks around in his underwear. Then thereâs Sue, their extraordinarily ordinary teen daughter who fails at just about everything she tries with great gusto. Finally, thereâs Brick, their quirky fourth-grader, who reads constantly, whispers to himself and unapologetically marches to the beat of his own drummer.