Wasted on the Young 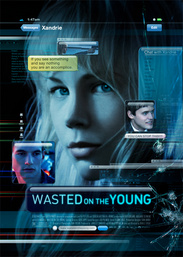 WASTED ON THE YOUNG is set in the socially conscious and disaffected society of an elite high school. Zack (Alex Russell), a member of the cool clique, and Darren (Oliver Ackland), a geeky kid, are step brothers who occupy opposite ends of the school hierarchy. Bullied by the cool kids, Darren finds himself forced to act when his tormentors go too far by drugging and assaulting his best friend Xandrie (Adelaide Clemens). After being left for dead in the middle of nowhere, Xandrie suddenly makes a surprise return to school that sets off a chain reaction of events. What begins as the devastation of Xandries world soon threatens to trigger the implosion of the whole social hierarchy. Soon, the brothers lives are at the mercy of the opinions of their classmates.