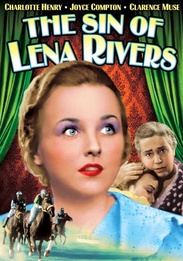 Following the death of her beloved grandfather, orphaned teenager Lena Rivers goes with her grandmother to live in the Kentucky home of her Uncle John, whose family believes the girl illegitimate. Lena meets Durrie Belmont, the ward of her wealthy next-door neighbor, and romance blossoms. But bitterness and jealousy from members of both families plaque the young couple, and ugly rumors about Lena's parentage lead to a shocking revelation that irrevocably alters her life.

Based on a popular novel that had already been adapted to the screen three times and dramatized for the stage, The Sin of Lena Rivers was a prestige motion picture for Tiffany Productions, the classiest independent studio operating in Hollywood during the early Depression years. Although it lacked the resources of MGM or Paramount, Tiffany gave its movies sturdy production mounting and hired the best casts available. That careful approach to indie filmmaking distinguished its product and is particularly apparent in Lena Rivers, which greatly pleased the small-town and working-class audiences for whom it was intended. It also kick-started the career of wholesome ingenue Charlotte Henry, who became a minor star after appearing in Paramount's Alice in Wonderland the following year, but is best remembered for her role as Little Bo-Peep in the Laurel and Hardy classic, Babes In Toyland (1934).