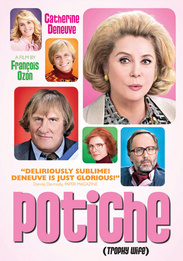 Set in 1977 in a provincial French town, POTICHE is a witty and charming comedy starring Catherine Deneuve as Suzanne Pujol, a housebound trophy housewife' (or "potiche") who steps in to manage the umbrella factory run by her tyrannical husband (Fabrice Luchini) after the workers go on strike. To ev- eryone's surprise, Suzanne proves herself a competent and assertive woman of action. GeÌrard Depardieu plays a union leader and Suzanne's ex-beau who still holds a flame for her. With POTICHE, acclaimed writer-director FrancÌ§ois Ozon (SWIMMING POOL, 8 WOMEN) has created a satirical and hilarious take on the war between the sexes and classes.

Rated R for some sexuality.