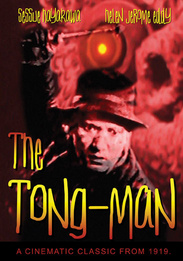 Merchant Louis Toy has grown rich trafficking in curios and smuggling opium from his Chinatown storefront. When he refuses to pay protection money to the powerful Tong clan, he is marked for death by Ming Tai, head of the dreaded secret society. Luk Chan, the Tong's most feared assassin, is ordered to kill the rebellious storekeeper. Luk, who plans to marry Louie Toy's beautiful daughter, San Chee, has a horrible dilemma. He must kill his future father-in-law within ten days and lose the woman he loves, or find himself marked for death and pursued by the murderous Tong gang.

Sessue Hayakawa rose to fame in 1914 after his roles in The Wrath Of The Gods and The Typhoon. His sexually charged performance in Cecil B. DeMille's The Cheat (1915) established him as Hollywood's first Asian-American star. In the 1920s a tide of anti-Asian hostility resulted in diminished opportunities for roles, and Hayakawa returned to his native Japan. Returning to Hollywood after WWII, he had a career resurgence as a character actor with notable appearances in Tokyo Joe (1949), Three Came Home (1950) and Bridge Over The River Kwai (1957) in a role that earned him an Academy Award nomination.

BONUS: Includes an episode of the classic TV show, "The Adventures of Fu Manchu."